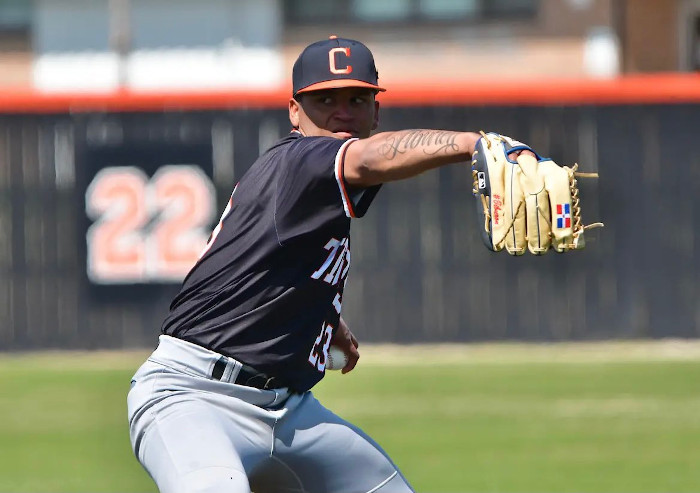 Miguel Fulgencio, one of the top junior college relief pitchers in the country, will get to live out a childhood dream and pitch professionally after being selected by the Pittsburgh Pirates in the 13th round of the Major League Baseball draft Tuesday.

According to mlb.com’s draft tracker, Fulgencio began his college athletic career on the football field as an Oklahoma State running back. He transferred to Cowley College, switched to baseball and played in the outfield during the shortened 2020 season, then taught himself to pitch and refined his delivery while watching YouTube videos during the pandemic layoff.

“A pitcher the last two years, he’s intriguing as a lefty reliever with a 90-96 mph fastball and tight slider,” mlb.com’s profile said. “He went 7-0 with five saves, a 1.75 ERA and a 60/8 K/BB ratio in 46 1/3 innings this spring as the Tigers reached the finals of the Junior College World Series. He’ll transfer to (the University of) Oklahoma if he doesn’t turn pro, though at age 23 he should be very signable.”

In two seasons at the school, he helped the Tigers run their string of conference titles to five in a row, and led the Tigers to back-to-back JUCO World Series appearances. This past season, Cowley finished as the national runner-up and went 54-11.

“He was a pure joy to have in our program and we are proud of his accomplishments,” Burroughs said in a news release from Cowley. “He is a great young man and is deserving of this opportunity.”

Former Cowley College baseball player Blake Robertson was also drafted by the Tampa Bay Rays in the seventh round and Tiger baseball signee Cade Perkins of Manhattan (KS) High School was taken in the 19th round by the San Francisco Giants.

Robertson, who this past season was the starting first baseman for the national runner-up University of Oklahoma baseball team, batted .300 with a team-leading 24 doubles for the Sooners. He added five home runs and 52 runs batted in. During his one season at Cowley, Robertson batted .358 with six home runs and 65 RBIs.