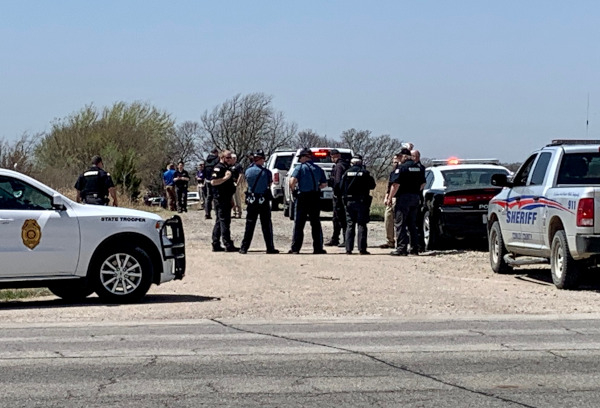 Law enforcement from several agencies gather north of Winfield April 15 following an officer-involved shooting in the area of U.S. 77 and 122nd Road. (Photo by Brady Bauman)

The shooting death of a 32-year-old Ark City woman by deputies with the Cowley County Sheriff’s Office in April has been ruled lawful and justified, according to County Attorney Larry Schwartz Thursday morning.

Andrea Barrow shot at three deputies and hospitalized two the afternoon of April 15 north of Winfield near U.S. 77 on 122nd Road after the deputies contacted her inside her vehicle.

That day, around 11:00 a.m., Cowley County dispatch received a complaint of a suspicious vehicle in the 10000 block of 101st Road in rural Cowley County. The vehicle was described as a black Jeep with the driver possibly being under the influence of drugs.

Upon arriving at 101st road, Sunnenberg met the individual who had made the 911 call.

This individual further described the suspicious vehicle as a black Jeep with very dark windows, an Oklahoma tag, and very low tire pressure, the report said. He stated that the driver was a female and drove the Jeep into his driveway where he talked to her.

He said she didn’t seem to make any sense.

At one point she told him she was out of gasoline, so he gave her a gallon. He further reported that his trashcans, which were still up by the road for collection, were upset and that it was strange that he had not received mail that day, but his neighbors had. He said he usually receives a lot of mail.

Finally, he said that he saw the Jeep stop by his neighbor’s place where the neighbor confronted her as well.

The officers began patrolling the area in search of the described vehicle. A second 911 call came through dispatch reporting a suspicious vehicle on 122nd Road.

Sunnenberg located a vehicle matching the description on 122nd Road approximately one-eighth of a mile west of U.S. Highway 77. He parked his patrol vehicle some distance away due to the condition of the graveled road, activated his body camera, and approached the black Jeep on foot.

Sunnenberg’ s body camera showed he arrived at the driver’s side window of the Jeep at one minute and 25 seconds after it was activated. At the Jeep, he encountered a female, alone, sitting in the driver’s seat with the window down. She would later be identified as Andrea Claudette Barrow.

During this time Sunnenberg notices a Kansas license plate with a Cowley County sticker in the Jeep.

The report says Barrow appeared to move the license plate to a place where Sunnenberg would not be able to see it.

At about the 3-minute 33-second mark on Sunnenberg’ s body camera, officers Van Royan and Young arrive and take positions around the Jeep.

Van Royan walks around the Jeep and sees a partially opened pocket knife on the seat in between Barrow’s legs. Sunnenberg continues to speak with Barrow and at the 4-minute 55-second mark on his body camera, he asks her to give him the license tag. Barrow refuses. At the 5-minute 18-second mark, Sunnenberg asks Barrow to step out of the vehicle. Barrow becomes increasingly agitated, refusing to comply with Sunnenberg’ s requests. Barrow told Sunnenberg the Kansas license tag was for the Jeep.

Sunnenberg tells her the Jeep already has a tag. Sunnenberg offers to “run” the license plate. Body camera footage shows Sunnenberg’ s disposition remained calm and respectful throughout the encounter, the report states.

Approximately a minute and a half later, Barrow is again asked to exit the vehicle but refuses. Sunnenberg opens the Jeep door to get Barrow out. Van Royan moves to take a position by the front passenger side door and opens the door. Young had moved to a position to the right of Sunnenberg by the back driver’s side door. Barrow still refused to exit the Jeep. She shifted herself to the right side of her seat and placed her right hand between her seat and the center console.

Sunnenberg and Van Royan asked her what she was reaching for and told her multiple times to stop reaching. The officers drew their tasers on Barrow and asked her to comply, stating that they did not want to tase her. Sunnenberg then spent some time trying to talk to her with tasers still drawn. Sunnenberg explained to Barrow why she was being arrested.

Barrow replied telling officers “Not to do this to her,” with her right hand still between the seat and console.

By the 9-minute 7-second mark on Sunnenberg’s body camera, Barrow appears more agitated and appears to shift around in her seat nervously as though she is preparing to do something. Sunnenberg tells Van Royan to deploy the taser.

Within the next minute, Van Royan deployed the taser from his position in the front passenger doorway, striking Barrow. Sunnenberg moved in and attempted to get Barrow out of the vehicle by grabbing her left arm and shoulder. Van Royan, from the passenger side, sees Barrow has a gun in her right hand and hollers, “Gun!” multiple times.

At the 9-minute 13-second mark on Sunnenberg’ s body camera, while coming out of the vehicle, Barrow falls to the ground on her back and right side.

What sounds like a barrage of 4-5 gunshots can be heard. Barrow had shot her 9mm pistol upward and hit Sunnenberg in the groin area, upward and more to her right and hit Young in the left arm, and back through the Jeep hitting Van Royan in the left index finger.

Van Royan had fired one round through the Jeep at Barrow as she was firing. Sunnenberg sought cover by a pile of brush and limbs which was by the road. He reports seeing Barrow lean over the brush pile and briefly look at him and then return to the Jeep. Young took cover at the front passenger side of the Jeep, and Van Royan worked his way up the road for cover. After a short pause, more gunshots can be heard.

Sunnenberg and Young reported they thought Barrow had returned to her Jeep to reload. Young fired multiple rounds into the windshield upon seeing Barrow get back into the Jeep on the driver’s side and crawl across the console towards him. Shortly thereafter, at the 9-minute 32-second mark, Sunnenberg fired 18 rounds toward Barrow who at that time was partly inside the driver’s door of the Jeep.

Officers were taken from the scene by emergency medical services. Barrow was pronounced dead at the scene.

According to Oklahoma court records, Barrow had a long arrest record in several counties and was listed as a defendant in 19 cases that ranged from DUI to aggravated assault with a deadly weapon in December 2014, which was dismissed.

In April 2021, Barrow posted a video on Youtube. In it, she recited several government conspiracies involving organ harvesting, microchips, robots and biblical references to “the mark of the beast.”

The three officers were placed on administrative leave pending the conclusion of the county attorney’s investigation into the shooting.

“They each have different continued medical needs and will back to work as soon as possible,” Cowley County Sherriff Dave Falletti told KSOK Thursday afternoon.