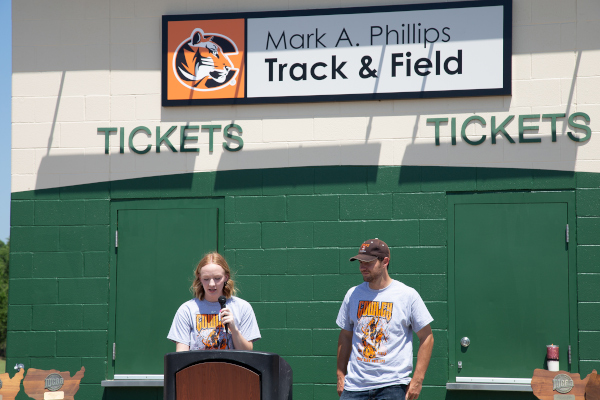 Hundreds of Phillips’ former athletes, co-workers, and friends were on hand for the ceremony.

Before the track and field dedication, a Celebration of Life event was held for Phillips inside Cowley College’s Robert Brown Theatre. Phillips passed away on April 5 after a courageous battle with ALS.

He has also served as the school’s assistant cross country coach and helped the 2010 men’s and women’s cross country teams capture national championships.

Before coming to Cowley, he spent 12 years at Johnson County Community College, including four years as head coach. During his tenure at Johnson, Phillips played a vital role in a lengthy list of cross country and track team accomplishments.

From the fall of 1989 to the spring of 1991, he was the head cross country and track and field coach at Kansas City Community College, where he turned the program into a national contender in the sprints, coaching 34 All-Americans.

The Northwest Missouri State graduate also saw his share of success as a collegiate student-athlete. He was a pole vaulter/sprinter at Cloud County and Northwest. At Cloud, Phillips was a Region VI champion and a two-time national qualifier in the pole vault.

At Northwest, he set school and Missouri Intercollegiate Athletic Association records while winning three conference championships in the pole vault and as a member of a school record and National Collegiate Athletic Association Division II national qualifying 4×100-meter relay team. He was a member of the 1982 MIAA conference championship team and qualified for two NCAA Division II national meets in the pole vault.

Phillips’ wife, Naomi, thanked those in attendance for making it a special day for her family.