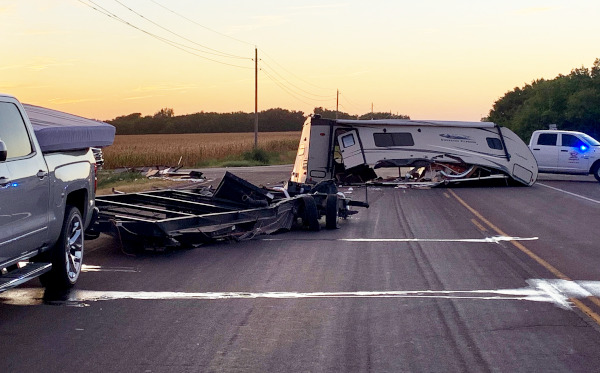 A collision involving an SUV and a pickup hauling a camper trailer shut down U.S. 160 at Cowley 3 Tuesday evening.

According to the Cowley County Sheriff’s Office Wednesday afternoon, a 2018 Chevy pickup driven by Vontress Tillis, 54, of Wichita, was traveling south on Cowley 3 and was turning east on U.S. 160 from a stop sign, pulling a 2010 Coachman travel trailer.

Another vehicle, a 2017 Subaru Forrester, driven by 29-year-old Sarah Case of Wellington, was traveling west on U.S. 160 and struck the camper near the axle.

Tillis was issued a citation for failing to yield at a stop sign.

Both the camper and the Subaru were towed and Case was medically checked at the scene and released.

Tillis and a passenger were not injured.

The accident scene and cleanup blocked both east and west traffic temporarily at U.S. 160 at Cowley 3.