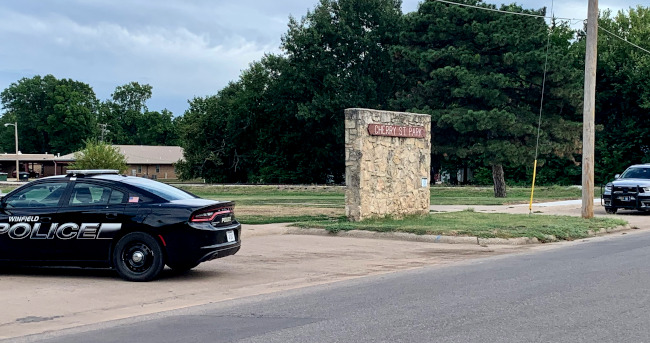 The Winfield Police Department is asking for the public’s help involving an investigation at Cherry Street Park Thursday night that temporarily closed the park.

According to a news release from the WPD Thursday evening, at approximately 1:14 p.m. officers from the Winfield Police Department were dispatched to Cherry Street Park, at the 1500 block of Cherry Street, for a report of suspicious devices in the park.

Upon arrival, officers met with employees from the City of Winfield who were performing maintenance in the park. The employees reporting that while mowing in the park they located at least two small items that looked suspicious.

Members of the WPD worked directly with administration from Whittier Elementary School to ensure alternate routes around the park were utilized for students who either walk or ride bicycles home from school.

Out of an abundance of caution, members from Wichita Police Department’s Bomb Squad responded to investigate.

During the investigation three small items were collected and will be investigated further. It is believed this is an isolated incident and no residences were in danger.

The Winfield Police Department is asking anyone who has any information regarding this incident to call (620)221-5547 or 911. The police department also wants to remind the pubic that if the see any item that is either suspicious or dangerous to leave the item alone and call 911.

The park was reopened Thursday night to the public.

This is an ongoing investigation and no further information will be released at this time.

Cherry Street Park in Winfield is closed due to an investigation after city mowing crews found suspicious devices near the end of the school day.

Due to the park’s proximity to Whittier Elementary School, the Winfield Police Department closed off the park as a precaution.

“Our main concern was to keep foot and vehicle traffic out of of the park and to work with Whittier to make sure students on foot would avoid the park when school let out,” DeLong said.

In a Facebook post, the WPD said there is no immediate threat to residents in the area.