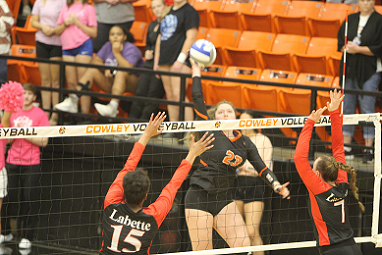 Two days after assuming the top spot in the NJCAA Division II national rankings, the Cowley College volleyball team ran its winning streak to six matches in a row with a 25-14, 25-14, 25-14 victory over Labette Community College Wednesday inside W.S. Scott Auditorium.

With the Tiger fans sporting pink attire in honor of Breast Cancer Awareness, Cowley ran its winning streak to six matches in a row. Cowley is now 27-2 overall and 6-1 in the Jayhawk Conference Eastern Division, while Labette falls to 6-19 overall and 1-6 in the conference.

“We started a little slow, and Labette was really scrappy,” Cowley head coach Steven Gream said. “Once we started getting into a rhythm and serving aggressively, we were able to pull away in all three sets.”

After another 25-14 win in set two, Cowley trailed 9-7 in set three before scoring seven straight points to grab control of the match.

Cowley will put its winning streak on the line when they play four matches in Fort Dodge, Iowa, on the weekend. On Friday, the Tigers will face Sauk Valley at 4 p.m. before battling No. 7-ranked Iowa Central at 7:30 p.m.

“We have got to get better swings to more first-ball kills,” Gream said. “All four teams were in the national tournament last year, so we will be pushed like you saw Johnson and Butler do against us. These matches will help prepare us for the playoffs.”