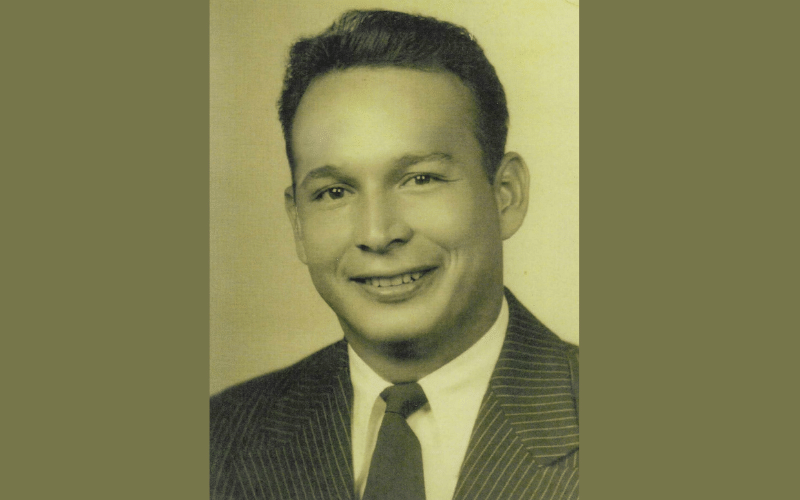 At Po-Hi, he distinguished himself through his artistic talent and his amazing athletic ability in both football and baseball.  After graduation, he played Minor League Baseball with the Yankee organization before enlisting in the Army for World War II.  During the way, he was awarded the Outstanding Marksman Award at Fr. Custer before shipping out first to Africa then to Europe as a paratrooper with the 101st Airborne Division.  After the war ended, he remained with his unit and toured Europe on their football team and also on the track team as a javelin thrower.  While playing football in Europe, he damaged his elbow which prevented his resuming his athletic career upon returning home.

When he returned to Ponca City, Walt married Gloria Kerr, his beloved wife of nearly forty years.  Together they had two children, a daughter Christopher and a son Walter D. Harris III, better knowns as Buck.

For the first twenty years of their marriage, Walt worked as a printer at The Ponca City News doing many of the cartoons, much of the advertising and many illustrations.  He then resigned to become a U.S. Postal Worker.  While working this government job, he took up his hobby of art again, and when the artwork became profitable enough, he retired from the Post Office to become a full-time artist.  An enrolled member of the Otoe-Missouria Tribe whose mother was the last hereditary tribal princess, he enjoyed great national and international success as a Native American artist.  His works hung in many museums and galleries throughout the country as well as in Europe.  In Oklahoma, he received the Outstanding Indian Artist award in both 1975 and 1977.  He even did a commissioned piece for a Vice-President of the U.S. which hung in the National Gallery of Art.

Walt was always dedicated to the young people of Ponca City and served for years coaching various Little League teams and an All-Star baseball team called “The Pig” named for and sponsored by the local drive-in restaurant of the same name.  He also coached YMCA teams for over ten years and American Legion baseball teams for over a decade.  Scores of young men consider him one of the greatest influences in their lives.

Walt was a charismatic man who never met a stranger.  A great self-promoter, he was a great ambassador for Ponca City. He was always proud of his hometown and always tried to be a good representative for his friends and neighbors.

Tickets are $50 per person or a reserved table for eight is $500 (eight tickets). Tickets are now on sale and may be purchased at the PCPS Central Administration Building, 613 East Grand. Inquiries may be made to Chryl Gillespie at 580-767-8000.

Ken Luttrell Named to CLEER Board of Directors

This Weekend: Benefit Cornhole Tournament for the Willy Hargraves Family