High wholesale power prices are impacting Ponca City Energy customer bills and may continue to do so into the near future. These high costs are being felt nationwide and are a combination of a series of factors, most notably high natural gas prices and historic demand.

For its short-term outlook, the Energy Information Administration reported that it expects the average peak-hour wholesale prices in the SPP (Southwest Power Pool) during June through August to nearly double from the previous year. Nationally, residential rates are expected to increase by 3.9 percent during June through August of 2022. On July 5, the SPP announced that it had reached an all-time peak load and sent out multiple alerts about grid conditions due to unusually high demand.

Recently, the Oklahoma Municipal Power Authority, Ponca City’s Energy’s wholesale power supplier, reported that natural gas prices were up 291 percent in May from the previous year. Reasons cited for the high cost of natural gas include production lapses, the Russian invasion of Ukraine, and demand both domestically and internationally. A larger portion of gas produced in the United States is being shipped to Europe and Asia in the form of Liquified Natural Gas. This is keeping prices high, as it limits the supply available here. 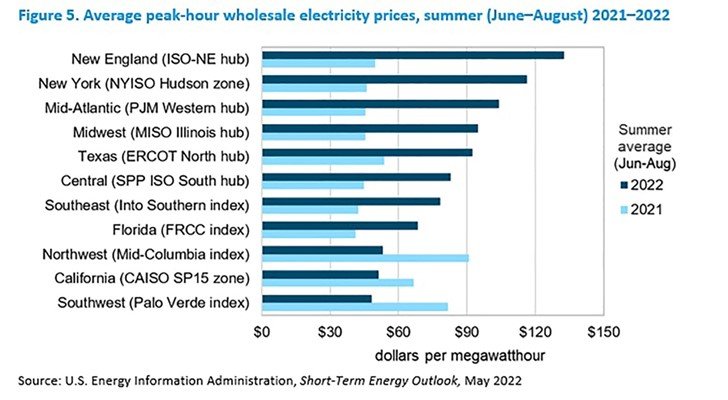